A Midnight in Scotland Novella

A duke, an abduction. What could go wrong?

Young widow Lucie Carmichael has made too many mistakes in her life—choosing the wrong husband, trusting the wrong solicitor, wearing the wrong shade of red to a funeral. But this time is different. This time, she has a plan. The Duke of Dingwall is about to evict her family from their ancestral home, and she means to change his mind, even if it involves a little abduction.

A night in Scotland, a woman in red. What’s a man to do?

Silas Northfield is not the Duke of Dingwall, no matter how many times a mad Scottish beauty in a tight red dress insists he is. When she abducts him from a meeting with his half-brothers, Silas decides to take matters—and the luscious Lucie Carmichael—into his own hands. But teaching Lucie to unleash her stunning sensuality might be his greatest mistake. Because she’s sworn never to remarry, and he’ll need more than a night to satisfy his hunger for this heartbreaking woman. He’ll need a lifetime. 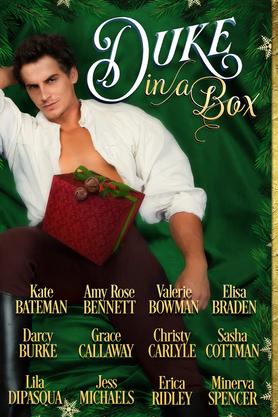 The Duke Who Came to Christmas Dinner
by Amy Rose Bennett
When a bah-humbug duke is invited to Christmas dinner by his widowed neighbor, the sweet-as-a-sugarplum daughter of his former estate steward, his initial reaction is to say no ... until he recalls their long-ago first kiss beneath the mistletoe...

Mrs. Peabody and the Unexpected Duke
by Grace Callaway
When former lovers Hawker and Mrs. Peabody are paired on a spy mission over the holidays, they uncover the deepest secret of all: the truth of their own hearts.

Yule Be My Duke
by Darcy Burke
When enemies John and Cecilia are trapped alone in a cottage during a snowstorm, they know marriage will be imminent, but can they become lovers by morning?

The Frosty Duke
by Lila DiPasqua
When a socially awkward mathematician spinster seeks to enlist the aid of a handsome, skillful rake—things may not go to plan.

Desert Island Duke
by Kate Bateman
When Caro Montgomery is shipwrecked with her brother’s infuriatingly attractive best friend, Max Cavendish, their survival depends on working together. But will their island prove to be a tropical paradise ... or pure hell?

Her Duke at Midnight
by Christy Carlyle
When a young widow and an infamous duke meet at a country house party during the holiday season, the attraction that sparks between them takes them both by surprise.

Her Duke With Benefits
by Jess Michaels
After confusion and a storm trap old friends Leo and Alice together for the holidays, long hidden desires and feelings come to the surface. But if the duke offers his heart before their time together is over, will she take that gift?

The Duke Deal
by Valerie Bowman
When a young duchess asks her estranged husband to pretend they're happy during a Christmastide house party to fulfill her grandfather's dying wish of seeing the entire family together at the holidays, the duke agrees...with one condition: he wants an heir.

Audacious
by Minerva Spencer
Antonia Redvers has been completely and madly in love with the infamous privateer Captain Lucas "O Duque" Cruz, her father's best friend, since she was a girl. This Christmas, Toni is done waiting—she's finally going to get her duke...

My Duchess, My Wife
by Sasha Cottman
With a castle full of relatives at Christmas, a Scottish duke comes up with more than one naughty way to distract his wife.

Undressing the Duke
by Erica Ridley
When the Duke of Southbury informs his charming French valet of his impending dismissal, Vachon has only a fortnight to convince the duke to change his mind… and take a chance on love!

Right Place, Wrong Duke
by Elisa Braden
Widow Lucie Carmichael is not about to let the Duke of Dingwall evict her family from their ancestral home, even if that means engaging in a little abduction.​