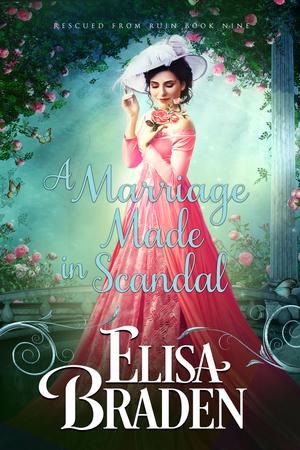 A Marriage Made in Scandal
Rescued from Ruin, Book Nine

Wanted: A countess for the most feared lord in London

With a family legacy tainted by murder and madness, Phineas Brand, the Earl of Holstoke, is having a devil of a time securing a proper wife—or even an improper one. Society misses faint at the sight of him. Matchmaking mamas scurry to avoid him. Only one woman is bold enough to keep drawing near, and she’s more scandalous than he is.

Caution: A lady’s brazen ways may lead to ruin

Lady Eugenia Huxley knows all about running aground in the marriage mart, thanks to a scandal involving a footman and too much drink. No matter. She’ll gladly pursue millinery over matrimony. But when her sister’s spurned suitor returns to London in search of a wife, she can’t resist offering him a bit of courtship advice, even if the chilly, brilliant, honorable Lord Holstoke does give her shivers—heated, head-to-toe shivers that are anything but fearful.

Danger: This match may be combustible

After a series of vicious murders brings suspicion to Holstoke’s door, Eugenia risks everything to be his alibi. The only rational remedy is to marry the minx before she generates another scandal. Yet, the dangers don’t end at the altar. A poisonous enemy coils ever closer, threatening the woman who awakens his soul. How far will he go to protect her? That may be the greatest danger of all.