A Rescued from Ruin Collection: Volume One

Ever Yours, Annabelle (Prequel)
As a girl, Annabelle Huxley chased Robert Conrad with reckless abandon, and he always rescued her when she pushed too far—until the accident that cost him everything. Seven years later, Robert discovers the girl with the habit of chasing trouble is now a siren he can’t resist. But when a scandalous secret threatens her life, how far will he go to rescue her one last time?

The Madness of Viscount Atherbourne (Book One)
Victoria Lacey’s life is perfect—perfectly boring. Agree to marry a lord who has yet to inspire a single, solitary tingle? It’s all in a day’s work for the oh-so-proper sister of the Duke of Blackmore. Surely no one suspects her secret longing for head-spinning passion. Except a dark stranger, on a terrace, at a ball where she should not be kissing a man she has just met. Especially one bent on revenge.

The Truth About Cads and Dukes (Book Two)
Painfully shy Jane Huxley is in a most precarious position, thanks to dissolute charmer Colin Lacey’s deceitful wager. Now, his brother, the icy Duke of Blackmore, must make it right, even if it means marrying her himself. Will their union end in frostbite? Perhaps. But after lingering glances and devastating kisses, Jane begins to suspect the truth: Her duke may not be as cold as he appears.

Desperately Seeking a Scoundrel (Book Three)
Where Lord Colin Lacey goes, trouble follows. Tortured and hunted by a brutal criminal, he is rescued from death’s door by the stubborn, fetching Sarah Battersby. In return, she asks one small favor: Pretend to be her fiancé. Temporarily, of course. With danger nipping his heels, he knows it is wrong to want her, wrong to agree to her terms. But when has Colin Lacey ever done the sensible thing? 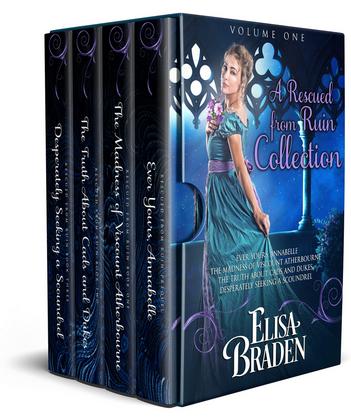