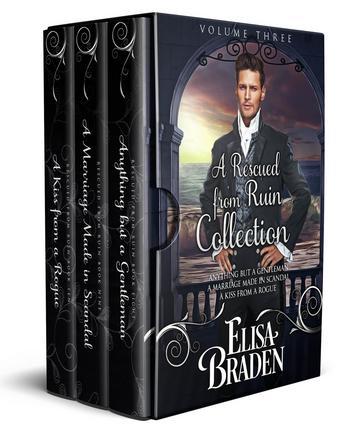 Anything but a Gentleman (Book Eight)
Augusta Widmore must force her sister’s ne’er-do-well betrothed to the altar, or her sister will bear the consequences. She needs leverage only one man can provide—Sebastian Reaver. When she invades his office demanding a fortune in markers, he exacts a price a spinster will never pay—become the notorious club owner’s mistress. And when she calls his bluff, a fiery battle for surrender begins.

A Marriage Made in Scandal (Book Nine)
As the most feared lord in London, the Earl of Holstoke is having a devil of a time landing a wife. When a series of vicious murders brings suspicion to his door, only one woman is bold enough to defend him—Eugenia Huxley. Her offer to be his alibi risks scandal, and marriage is the remedy. But as a poisonous enemy coils closer, Holstoke finds his love for her might be the greatest danger of all.

A Kiss from a Rogue (Book Ten)
A cruel past left Hannah Gray with one simple longing—a normal life with a safe, normal husband. Finding one would be easy if she weren't distracted by wolf-in-rogue’s-clothing Jonas Hawthorn. He's tried to forget the haughty Miss Gray. But once he tastes the heat and longing hidden beneath her icy mask, the only mystery this Bow Street man burns to solve is how a rogue might make Hannah his own.