The Devil Is a Marquess (Book Four)
A walking scandal surviving on wits, whisky, and wicked skills in the bedchamber, Benedict Chatham must marry a fortune or risk ruin. Tall, redheaded disaster Charlotte Lancaster possesses such a fortune. The price? One year of fidelity and sobriety. Forced to end his libertine ways, Chatham proves he is more than the scandalous charmer she married, but will it be enough to keep his unwanted wife?

When a Girl Loves an Earl (Book Five)
Miss Viola Darling always gets what she wants, and what she wants most is to marry Lord Tannenbrook. James knows how determined the tiny beauty can be—she mangled his cravat at a perfectly respectable dinner before he escaped. But he has no desire to marry, less desire to be pursued, and will certainly not kiss her kissable lips until they are both breathless, no matter how tempted he may be.

Twelve Nights as His Mistress (Novella – Book Six)
Charles Bainbridge, Lord Wallingham, spent two years wooing Julia Willoughby, yet she insists they are a dreadful match destined for misery. Now, rather than lose her, he makes a final offer: Spend twelve nights in his bed, and if she can deny they are perfect for each other, he will let her go. But not before tempting tidy, sensible Julia to trade predictability for the sweet chaos of true love.

Confessions of a Dangerous Lord (Book Seven)
Known for flashy waistcoats and rapier wit, Henry Thorpe, the Earl of Dunston, is deadlier than he appears. For years, his sole focus has been hunting a ruthless killer through London’s dark underworld. Then Maureen Huxley came along. To keep her safe, he must keep her at arm’s length. But as she contemplates marrying another man, Henry’s caught in the crossfire between his mission and his heart. 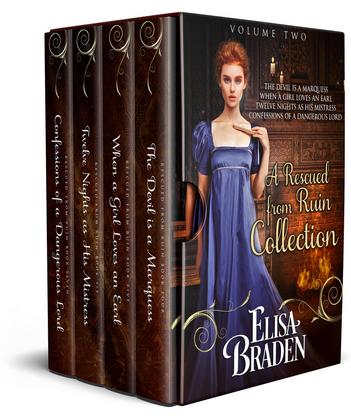