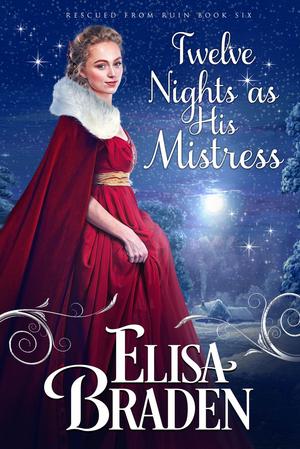 Twelve Nights as His Mistress
A Rescued from Ruin Novella, Book Six

Wooing may not be his strong suit
Admittedly, when it comes to courtship, the Marquess of Wallingham’s strategy has been a few roses short of a bouquet. Charles Bainbridge has spent two long years wooing the woman he loves, waiting patiently until he is half mad. Now, at a winter hunting party, he has one last chance to persuade her they are meant to be. And this time, he won’t let meaningless doubts, his meddling mother, or a few mishaps and mangled bonnets stand in his way.

And passion may not be hers
Safe and comfortable inside her tidy, carefully ordered existence, Julia Willoughby has never known longing like this. Others see Charles as the quiet, manageable sort. Julia sees the truth: This dragon’s son has a fire of his own. Enough to sear her with a touch, a glance, a kiss. For the sake of his happiness, she refuses to bind him in a childless union. Her heart, however, isn’t so easily convinced, for it wants Charles rather madly.

But a marquess must do what a marquess must do
Outraged at the thought of losing her to a dusty country squire, Charles makes a final offer: Spend twelve nights in his bed, and if she can still deny they are perfect for each other, he will let her go. But not before thoroughly tempting the lovely, stubborn Julia to trade sensible predictability for the sweet chaos of true love.