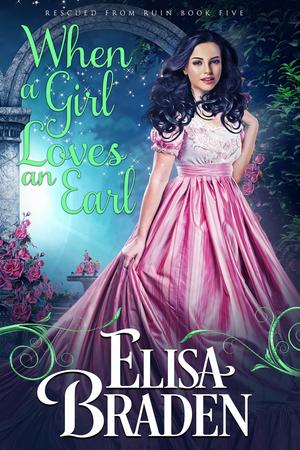 When a Girl Loves an Earl
Rescued from Ruin, Book Five

What a girl wants
Miss Viola Darling always gets what she wants. Always. And what she wants more than anything is to marry James Kilbrenner, the Earl of Tannenbrook. She’s fallen hard for the giant, taciturn, surly brute, and she positively will have no other. The problem? He’s not interested. Not even a little. But Viola cannot afford to lose. And she has her heart set on James. If only he will bend to a bit of persuasion.

Is an earl like no other
James Kilbrenner knows how determined the entirely-too-beautiful Miss Darling can be—the daft woman cornered him at a perfectly respectable dinner and mangled his cravat before he could escape. He has no desire to marry, less desire to be pursued, and will certainly not kiss her kissable lips until they are both breathless, no matter how tempted he may be.

And only the right one will do
Thrown in her path by a meddling marchioness, James finds himself under sensual siege from a tiny, flirtatious sprite who puts both his heart and his vow to remain unwed at risk. And when scandal looms, he learns the hard way that a man can resist only so long before the indomitable Miss Darling gets her way.